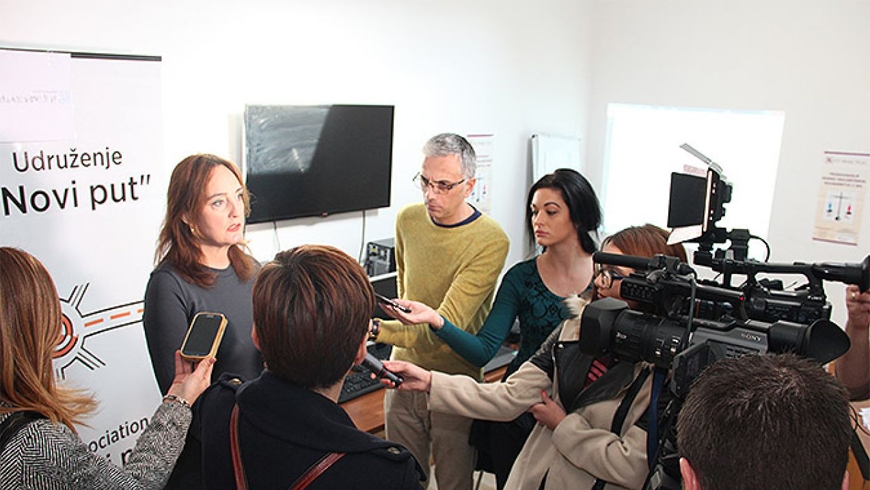 The Organisation Novi put was established in 2010 and it is registered at the State level. The Association “Novi put” is currently one of the few CSOs in B&H that has been focused on the prevention of human trafficking with the staff composed of experts with excellent knowledge of the relevant legislative and regulatory framework of B&H whose anti-trafficking experience ranges from 10-16 years.
„Novi put” is a member of the La Strada International NGO Platform and European NGOs Platform Against Trafficking, Exploitation and Slavery, (ENPATES) and it has been selected as the partner NGO by the B&H Ministry of Security, member of the core State Anti-trafficking Team.  The anti-trafficking endeavors of Novi put resulted in a signed Memorandum on Joint Cooperation with the B&H Min. of Security. Novi put participate in drafting and reviewing all the relevant State Action Plans and Strategies aimed at prevention of human trafficking, child pornography and paedophilia.

Due to the efforts in combating trafficking in human beings “Novi put” was selected as the partner NGO of the B&H Ministry of Security and one of the members of the core Regional Monitoring Team for anti-trafficking which resulted in a signed Memorandum on Joint Cooperation.
Novi put has participated in drafting and reviewing all the relevant State Action Plans and Strategies aimed at prevention of human trafficking, child pornography and paedophilia. Currently, Novi put is the only NGO in the Region of Herzegovina that has been focused on the prevention of human trafficking and one of the few in B&H.

B&H has been a source, destination, and transit country for men, women, children, and persons with developmental disabilities who have been subjected to sex trafficking and forced labor both in B&H and in Europe. Continuous lack of proper anti-trafficking actions by the Government of B&H resulted that in the 2014 TiP Report B&H was degraded to the Tier 2 Watch List of „Countries whose governments do not fully comply with the TVPA’s minimum standards“. B&H population has been becoming more and more vulnerable to various forms of exploitation and lack of continuous awareness raising among categories especially vulnerable to THB for sexual exploitation such as underage girls, has resulted in increase of underage victims of sexual exploitation.  Due to a very bad economic situation in the country, increasing poverty and corruption, number of victims of labor exploitation has also significantly grown. Since 2014 until December 2015 more than 150.000 young people left the country looking for employment opportunities in abroad and unfortunately many of them ended up as victims of sexual and labor exploitation.

Due to a complex organisation of the State and various levels of authorities, civil society organisations are working on grass-root prevention of human trafficking, child pornography and paedophilia.
Tweet
Published in New road

More in this category: « The goals, mission, vision
Login to post comments
back to top
Top 3
New road

News
Implementation of an awareness campaign on human