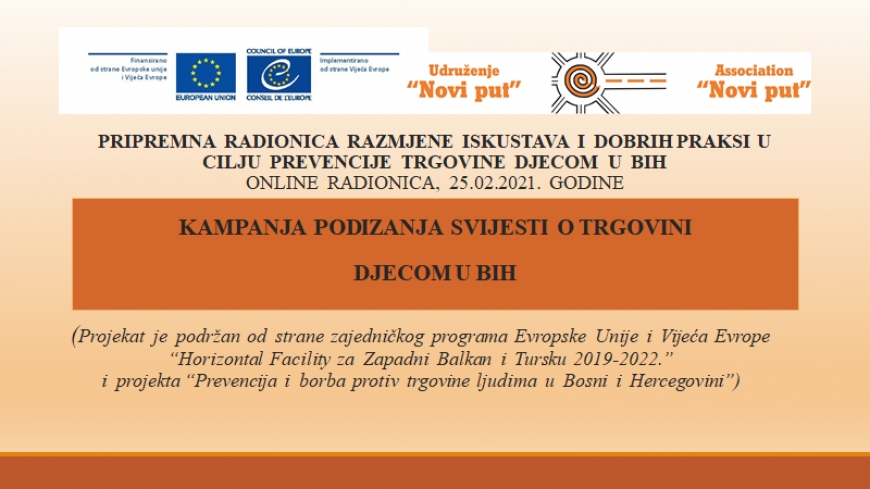 The association "Novi put" organized a preparatory online workshop on the occasion of the start of the awareness raising campaign about child trafficking in Bosnia and Herzegovina, which is supported by the joint programme of the European Union and the Council of Europe "Horizontal Facility for the Western Balkans and Turkey 2019-2022" and the Project "Prevention and Combating Trafficking in Human Beings in Bosnia and Herzegovina", on February 25, 2021. The awareness raising campaign will be implemented by the Association "Novi put" in the period February-July 2021 in co-operation with the member organization of the RING network" - Foundation "Lara" Bijeljina, “Women's Rights Center “ Zenica, Association „Women of B&H“ Mostar, Association „Budućnost“ Modriča, Association of Roma Women "Better Future" Tuzla, Foundation "United Women" Banja Luka, and in cooperation with officials of state institutions and public services that have in their mandate the preventing and combating of trafficking in human beings and children, as well as other members of the Network "RING“.

The workshop was attended by 17 people, representatives of the Council of Europe, officials of the state institutions and public services  which are in charge of preventing and combating child trafficking (Ministry of Security of B&H, Department for Combating Trafficking in Human Beings, Ministry of Human Rights and Refugees of B&H, Federal Police Administration, Ombudsman for Children of Republic of Srpska, Ministry of Labor, Health and Social Welfare of the HNK, Cantonal Center for Social Work, Mobile Team for Prevention of Begging), and non-governmental organizations, members of the RING Network (Foundation "Lara" Bijeljina, Association "Žena BiH" Mostar, "United Women“ Banja Luka, Association "Budućnost" Modriča, Association of Roma Women "Bolja budućnost" Tuzla, UREM "Siguran korak", Association "Novi put").

In the introductory part, the participants were addressed by Elma Zahirović, Project Manager of Prevention and Suppression of Trafficking in Human Beings in Bosnia and Herzegovina, Council of Europe Office, as well as Abida Pehlić, President of the Association "Novi put" Mostar.

State Coordinator for Combating Trafficking in Human Beings Samir Rizvo and Assistant of Minister for Human Rights and Refugees of B&H Saliha Đuderija, and Assistant of Minister of Labor, Health and Social Welfare of the HNK Alma Kozo presented the current situation regarding child trafficking, planned measures and activities aimed at preventing and combating child trafficking. Irena Penc Puzić from the Ministry of Human Rights and Refugees of B&H and Gordana Rajić, a representative of the Office of the Ombudsman for Children of the Republic of Srpska, also addressed the audience.

Through introductory speeches, constructive discussion and active participation of all present, organizers tried to make a cross-section of the current situation in the field of prevention of child trafficking, to exchange experiences and information and see opportunities for further action, networking and co-operation.

After the introductory speech in which were the goals and activities of the project presented, there was an exchange of experiences and information from representatives of the governmental and non-governmental sector, and pointing out obstacles and opportunities to respond more effectively to the problem of child trafficking in B&H. Also, participants exchanged information on the current situation in the field of prevention of child trafficking, as well as experiences on the response of relevant actors and society in general. The workshop also defined the thematic framework of the campaign, the starting point for the preparation of a basic study on the situation in the field of child trafficking and the creation of the content and plan of the media campaign.

The participants concluded that child trafficking is a serious problem in Bosnia and Herzegovina, and that cooperation between the governmental and non-governmental sectors and their joint action are extremely important for an effective response to this problem. They pointed out that it is of great importance that the activities will focus on raising awareness about child trafficking among vulnerable categories, but also among the general public. Participants also agreed to contribute to a baseline study on child trafficking in B&H in line with available data. It was concluded that this project enables the networking of relevant actors in the field of combating all forms of child trafficking, especially forced begging and exploitation of children in pornographic performances. The conclusions of the workshop will be an excellent starting point for preparing a basic study on the situation in the field of child trafficking and creating the content and plan of the media campaign.

More in this category: « Obilježavanje Dana sigurnijeg interneta European Parliament's discussion on identification of children victims of trafficking for sexual exploitation in Europe »
Login to post comments
back to top